Welcome to the Coaster Capital of Orlando

If you’re looking for coaster thrills, we have news for you: You’re looking for SeaWorld. With the most roller coasters in one park, it’s officially the Coaster Capital of Orlando! Can you ride all six in one day? How many times? Take the challenge if you dare, but it’ll just have you coming back for more. Read on for a few fun facts about these thrilling rides and start making plans to experience them all in person, only at SeaWorld Orlando!

Journey to Atlantis
Journey to Atlantis rose from the sea in 1998 and led SeaWorld into ambitious new waters in the coaster field. It was the first of its kind in the world, combining a traditional water flume with a tubular steel roller coaster. An instant success, its popularity inspired the creation of two more Journey to Atlantis attractions at SeaWorld Orlando’s sister parks in San Antonio and San Diego.

On Journey to Atlantis, you’ll experience not one, not two, but three drops. You’ll surpass speeds of 40 miles per hour and face down a peak drop of 60 feet, all on 1800 feet of track in an attraction that spans over six acres. This beloved, history-making attraction never gets old. Guests of all ages continue to call it their favorite, letting all the first-timers know “she’s not what you think!” 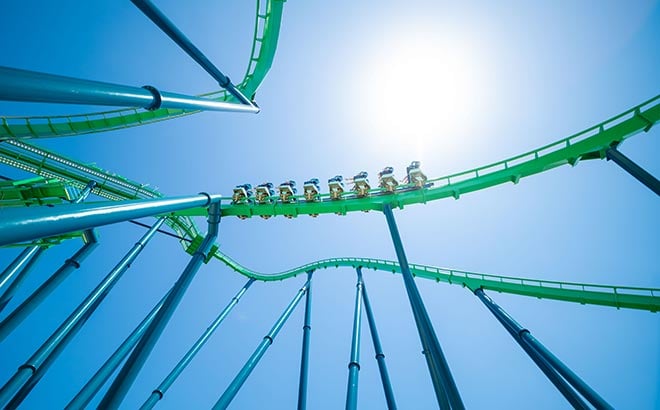 Kraken
If you thought things couldn’t get more intense, just stroll around the corner from the city of Atlantis and you’ll discover the mysterious Kraken. Another groundbreaking achievement, it debuted in 2000 as the first floorless coaster in Florida and paved the way for SeaWorld Orlando to build more coasters with famed manufacturer B&M.

When you board Kraken, you rise 149 feet in the air before that first heart-pounding drop kicks off a nonstop series of thrills. Hang on for seven monstrous inversions as you reach top speeds of 65 miles per hour. After more than 20 years, the otherworldly Kraken remains a timeless classic in the coaster industry. 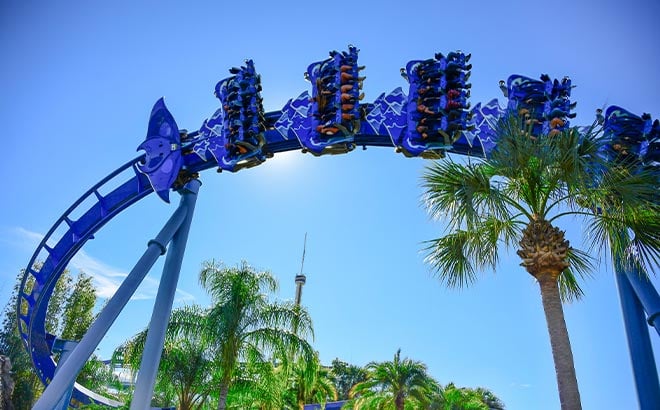 Manta
Among the largest ocean animals, manta rays are known for the way they glide through the sea. You’ll feel like you’re one of them when you ride Manta, SeaWorld Orlando’s immersive flying coaster. Located right in the middle of the park, this ride is sure to catch your eye (and your ear!).

Riding Manta means flying 141 feet in the air, surpassing speeds of 50 miles per hour, and facing four inversions (and maybe even a splash of water!), but that’s only part of the experience. Your head-first, face-down, inverted nosedive position is what will truly give you the sense that you’re a flying ray. 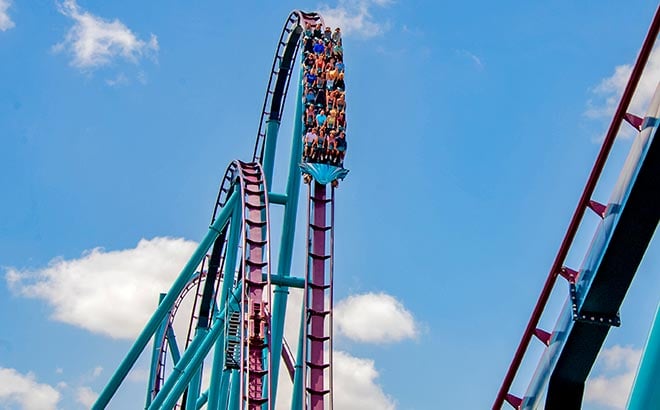 Mako
Have you ever wondered how it feels to be the fastest shark in the world? You can when you brave the one-and-only Mako. SeaWorld’s first hyper-coaster was inspired by the sleek but mighty Mako shark, debuting as Orlando’s fastest coaster in 2016. Since then, it has won countless awards for top coaster and become a favorite for guests and coaster fanatics (some have even ridden it over 100 times!). After rising more than 200 feet in the air, Mako sends you careening downward and back up again as you reach speeds of 73 miles per hour and soar through nearly a mile of track. The rush and the views are unmatched. But to take things to a whole different level, try riding at night when the park is open late! Whether it’s your first time or your 100th, you’ll always want more of Mako. 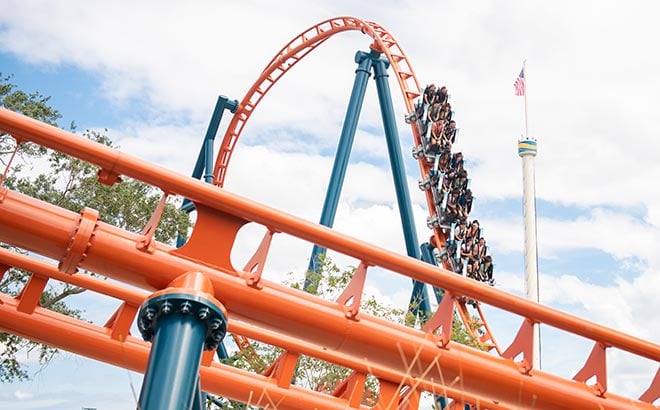 Ice Breaker
Are you ready to break the Ice? SeaWorld’s newest coaster pays tribute to the nearby Wild Arctic area with a few nods you might notice as you’re entering and moving through the queue. But the ride itself is where the real fun begins. Ice Breaker is SeaWorld Orlando’s first launch coaster, and we don’t just mean a single launch.

This chilling coaster sends you rocketing backward and forward (more than once!), culminating in the steepest beyond-vertical drop in Florida—a 93-foot-tall spike with a 100° angle. From there, you’ll reach top speeds of 52 miles per hour and get plenty of airtime. Ice Breaker was just named Best New Theme Park Attraction in the USA Today’s 10Best Readers’ Choice awards, and you’ll see why when you ride it! 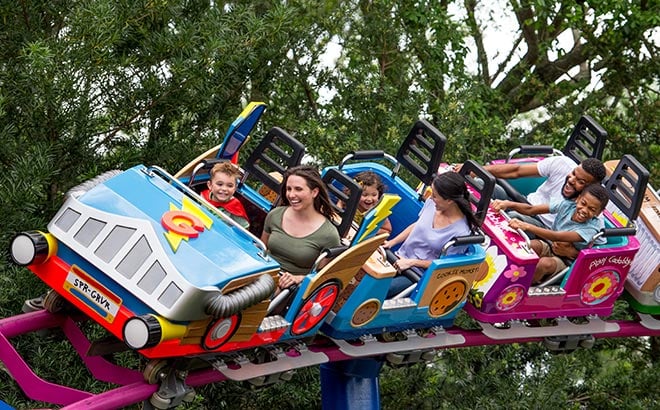 Join Grover as you zoom up, down, and around Sesame Street Land on this laugh-a-minute ride. It’s a perfect first roller coaster for kids and a fun-filled ride for adults to share!

Which One Will You Ride First?

It’s your turn to conquer the Coaster Capital of Orlando! From flying like sharks and rays to discovering lost continents and mythical monsters, there are thrills here that will stay with you long after you leave. Put together your coaster itinerary today and we’ll see you in the sky. 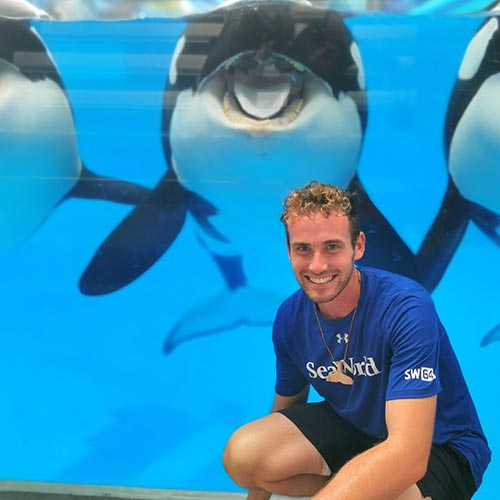 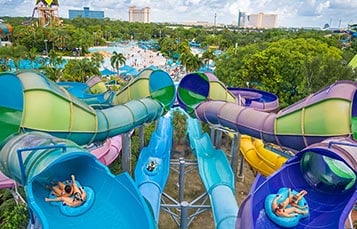 Bring a friend and get a free souvenir! 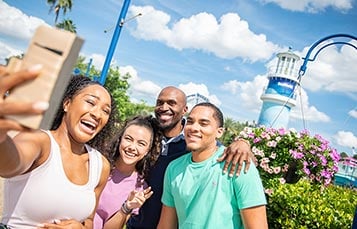 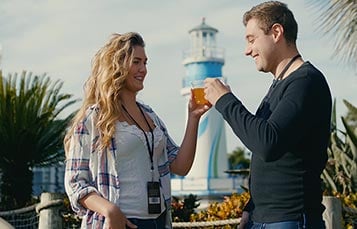 August continues our biggest summer of Pass rewards ever with more perks you won’t want to miss!