Dozer the walrus has returned to Wild Arctic! Fellow walruses Chouchou and Mitik, along with the rest of the Wild Arctic crew, welcomed back the 25-year-old gentle giant after his recent visit to Point Defiance Zoo and Aquarium in Tacoma, WA.

Dozer is one of only 15 walruses in accredited zoos and aquariums in the United States, an ambassador for his species who inspires visitors and advances walrus conservation. A few details about Dozer:

Come visit Dozer, Chouchou, and Mitik at Wild Arctic (and stay tuned for Walrus Awareness Week in December) to learn more about these prodigious pinnipeds! 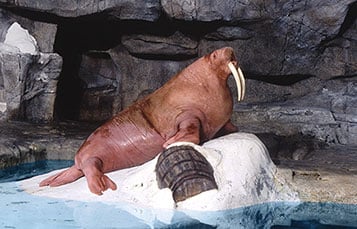 Why Arctic Sea Ice is Important

Sea ice is melting and that's not good!

We’re excited to celebrate a week dedicated to one of our favorite pinniped, the walrus! 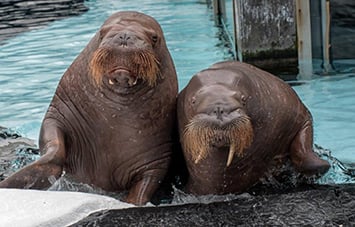 Get to Know Our Walruses

Get to know two of the cutest whisker faces at SeaWorld San Diego!